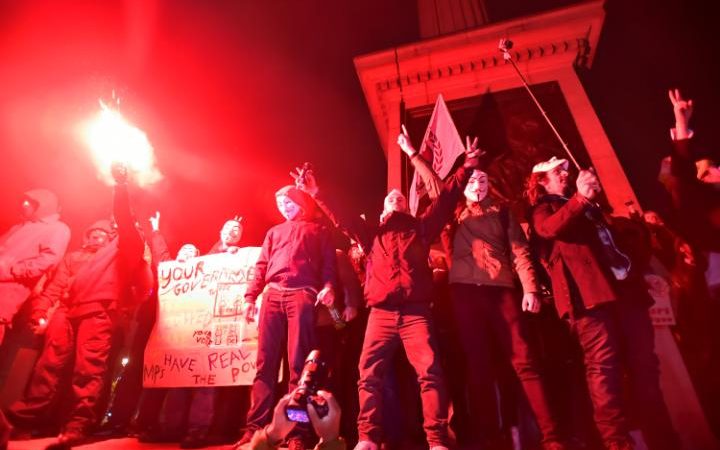 [rt] Anonymous activists are rallying across the globe on Guy Fawkes night for the annual Million Mask March, protesting against government corruption and calling for self-governance.

The Anonymous movement has gathered every November 5 since 2012 to coincide with Bonfire Night, a commemoration of the failed Gunpowder Plot of 1605. Protesters usually wear masks depicting Guy Fawkes – the infamous English Catholic who was caught and tortured for planning an assassination attempt on Britain’s King James I.

Marches are planned for 800 cities worldwide on Sunday, according to Anonymous, and will begin in most cities at 5pm local time to coincide with rush hours. Meeting points will be at city halls and State Capitol buildings

New York City, Washington DC, London, and Berlin are among the cities where major marches are expected.

More than 50 people were arrested at last year’s march in London. Police have imposed conditions on the event under the Public Order Act, including restricting march time to between 6pm to 9pm.

“Due to the previous history of this event, we have strong reasons to believe that peaceful protest is the last thing on the minds of some of those who will attend,” Chief Superintendent Elaine Van-Orden, said ahead of Sunday’s march.

Barcelona: You have to be brave to walk with Anonymous’s masks in a city full of police #MMM2017 photos by @Shad0w_S3K #Catalonia pic.twitter.com/EEWMfb01RT

This the start of the annual #Anonymous #MillionMaskMarch in DC. Shouts of “Anon for president!” #Washington pic.twitter.com/tXY2xVk3Lr

The themes for this year’s event include ‘Julian Assange is CIA’, ‘General Sands overthrows United States government for 9/11’ and ‘Isaiah 2:1-4 is in effect.’

The hacktivists urged people to join them in marching against governments and financial institutions in a video posted online, saying: “Every November 5, the Million Mask March is a sign that humanity around the world is crying out for change.”